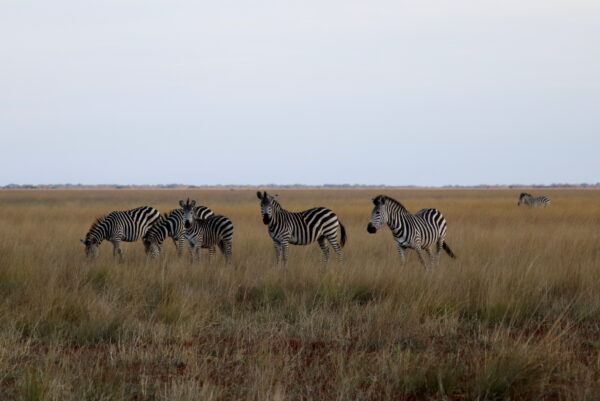 Pizi Safari - the Western Explorer features the Northern Kafue National Park and the vast grass plains of Liuwa Plain National Park plus the magnificent horseshoe shaped Ngonye Falls and the White Rhinos of Mosi-oa-Tunya NP. It starts in Lusaka and ends in Livingstone. This safari is for nature lovers, birdwatchers and holidaymakers with less time available. This safari can be extended to Lower Zambezi ( ->Zambezi Bush Break) and / or South Luangwa ( -> Luangwa Bush Break).

The biodiversity of Kafue NP is amazing. It is the largest and oldest national park in Zambia. In the North of Kafue is another big open area - Busanga Plains. Herds of Buffalo, Sable, Roan and Eland are often seen here.

Liuwa Plain NP is home to the 2nd largest Wildebeest migration in Africa. Spotted Hyenas are the apex predators here. They are hunting to survive and mainly active in the early hours of the day and late in the afternoon. During the hot hours of the day they are often laying near waterholes. Lions are using the thickets around Matamanene to ambush Wildebeest while Cheetahs chase after Oribi. Liuwa Plain was the traditional hunting ground of the Litunga, the King of Barotseland. To prevent poaching he settled his subjects around the boundary and allowed them to fish in the streams and let the cattle graze in Liuwa Plain. Even today it is still like this.

Upon arrival at Lusaka's "Kenneth Kaunda" International Airport (LUN) we will transfer you to the lodge in Lusaka. There you will do the final preparations and have a full briefing about the Pizi Safari - the Western Explorer. Pizi means zebra in the Lozi language. Let's hope we see many of them and a lot more animals and birds. Accommodation is in rooms.

The day starts with a healthy breakfast. Afterwards we load up and leave Lusaka to head west to the Kafue National Park. This is the largest national park in Zambia. It is bigger than Slovenia. The Kafue River is its lifeline. During the dry season wildlife concentrates along the river and the remaining waterholes. This national park is the most divers in terms of species and habitats. We will explore the park on game drives. An optional boat cruise is possible to add to the day's activities. Our meals are prepared with fresh ingredients and cooked over the open fire. Accommodation is in our comfortable canvas tents.

It's an early start as we have to move to our next destination - Mongu, the capital of Western Province. After breakfast and loading up we do a transfer game drive as long as we are in the Kafue NP before rejoining the Great West Road at Chunga North Gate. In Kaoma we will have our lunch stop and will reach Mongu in the afternoon. Time to stock up for the next days in Liuwa Plain NP. Accommodation is in rooms. Dinner is at own account.

We will drive across the Barotse Floodplains from Mongu to Kalabo, where we cross the Luanginga River on a manpowered pontoon. We will make our way through white powder sand and will reach the African Parks Office after about an hour. Time for some paperwork. Finally. Welcome to Liuwa Plain! The next three days we are going to spend on game drives in the endless plains looking or the Wildebeest and Spotted Hyenas. African Buffalo and Lion were reintroduced into the Liuwa Plains National Park recently. Did we mention the superb birdlife? Accommodation is in our comfortable canvas tents.

Today we are heading back to Mongu crossing the Barotse Floodplains, the huge area that gets flooded every year by the Zambezi River, again. The Lozi people of the floodplains live a semi-nomadic lifestyle. During the dry season it is the grazing ground for their cattle and fertile land to farm rise and other crops. We will get fresh supplies for the next destination. Accommodation is in rooms.

After breakfast we load up as usual and head down to Sioma on a good tar road. Our next destination are the lesser known Ngonye Falls in Sioma. This horseshoe shaped waterfall is the prettiest when the water levels of the Zambezi River are very low. We will take a stroll around the falls area and you will see it for yourself. Today's accommodation is in our comfortable canvas tents again.

The road is the destination. The first stretch of road up to Sesheke is in very good condition but than it turns in to a real adventure. We will dance around the potholes and will find our own track. From Kazungula to Livingstone we will enjoy another near perfect road again. Today is a driving day and no activities are planned. Accommodation is in rooms. Dinner is at own accounts.

Did you know that Livingstone's Mosi-oa-Tunya NP got Square-lipped Rhinos aka White Rhinos? In the morning when it is still cool we will head to the national park and go on a walking safari. This is our chance to see nature from the ground level, check for tracks, talk about plants and their use. The aim is to find some of the White Rhinos and see them from a close range. After this exhausting exercise we have a picnic by the river.
A visit to Livingstone isn't complete without seeing the Victoria Falls. To do this is the plan for the afternoon.
Accommodation is in rooms. Lunch and dinner is at own accounts.

After a comfortable night at the lodge we will have the last breakfast together. Depending on your flight time we can do some sight-seeing in Livingstone or a Helicopter ride (optional) or just spend time relaxing. We will transfer you to Livingstone International Airport (LVI) for your departure for your onward flight.